skip to main | skip to sidebar

Following four days of heavy rain last week, Bitter End Brewing Co's new brewery site to which we moved less than one month ago -Derwent Mills, in Cockermouth was surrounded by floodwater and inaccessible to those without water skis, or an ark.

We waded across on Friday, as the water level began to fall, in order to asses the extent of the damage, and I am relieved to report that the new premesis resisted the best attempts of the river to get in and very little damage occured -We're very fortunate that the brewery is housed a hundred yards upstream of the confluence of the Derwent and Cocker where the worst flooding took place. Had we been a few yards downstream it could have been a very different story. 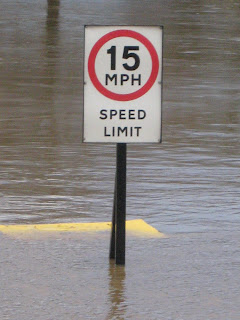 We've been brewing fine beers again this week for bottle and for cask, and remain open for business. It's strange to be cut-off from the town -the only foot bridge washed away and the road bridge closed, pending structural assesment. 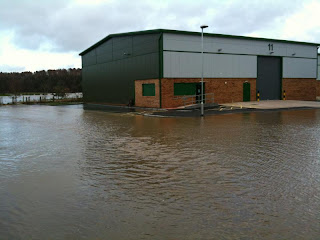 There have been some exciting developments at the brewery in recent weeks of which I will do my best to keep you abreast off...the development of our first ever India Pale Ale -Lakeland IPA -5.5%ABV -get down to the Round Table Beer festival in Cockermouth next weekend for a taste. Keep your eyes open for a special bottled version too!

In addition to IPA, there will also be two more additional brews available at your local farmers' market or foodhall -Visit www.bitterendbrewingco.com for detail and more of the latest news.
Posted by steveBrewer at 9:04 PM No comments:

The following news comes courtesy of our sometimes Herefordshire correspondant... 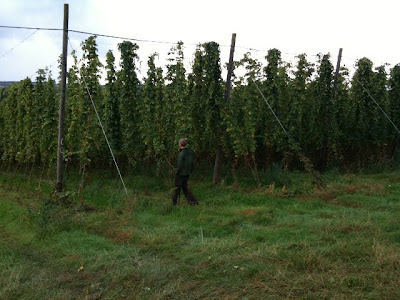 On the first day of September, Bitter End Brewery owner Mike and Brewer Steve, paid a visit to Pridewood Farm in Ashperton, Herefordshire at the invitation of hop merchants Charles Farhams. Farhams, based just the other side of the Malvern Hills were eager to show off the new state of the art hop kilns that have been installed at Pridewood after the old brick and timber kilns were badly damaged by fire during the 2007 season...The new kilns incorporate a greater degree of automation, reducing some of the manual work that was associated with the old kilns. The drying process itself too is computer controlled thus ensuring a better quality of end product although Pridewood's farmer Martin Powell-Tuck is still up to the early hours to keep a watchful eye over his hops -on this day, the first day of the 2009 harvest, it was Goldings that was being brought in. 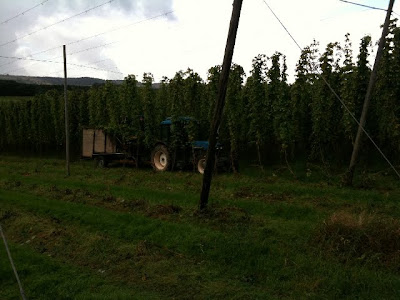 It is a wonderful sight to see the bines being cut out in the field, brought by trailer to the picking shed where the hops are stripped from the bine ready to be conveyed to the kiln where they're spread over the large floors and dried such that moisture is reduced by as much as 90%. 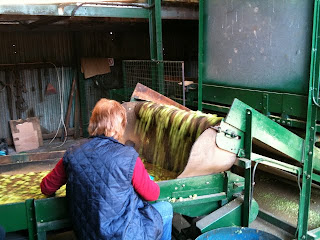 Drying the hops increases their storage capacity, vaccum packed so that the characteristcs which make Humulus Lupulus prized to such a degree by brewers are preserved, so that they may be used the whole year round. Drying however is not nesescary for the hops to be used in a brew and we were able to obtain a quantity immediately after picking and before kilning -5kilos of the first Goldings of 2009. The hops were brought back to Cumbria and pitched to a very special brew within 24 hours of picking...keep your eye out in the Bitter End this week for G.H.B. (Green-hopped Beer) at 4% ABV -A very special beer available for a limited period of each year only. 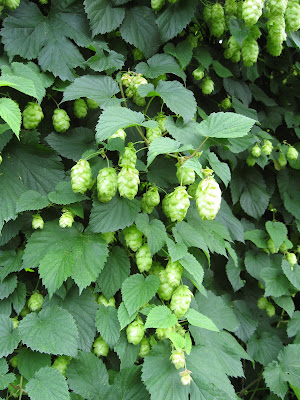 Posted by steveBrewer at 10:31 AM No comments:

Firstly, may I say how good it is to be in touch and with excellent news after some period of time. The brewery has been operating at full steam for the better part of the last three months -mash tun full of the finest English malted barley Thomas Fawcetts can supply, copper boiling all steam and hops, fermenters fermenting, casks rolling. So now it is that I am able to grab a moment to let you know what has been going on.

Brewing through the heatwave last month was fun, and visitors to the pub will have sampled the thirst quenchingly pale 'Grasp the Nettle' all though June -a seasonal special back by popular demand after it was so well recieved last year. Also a brand new beer, Bitter End Wheat Beer has been available, and so good was the response from customers at the pub that we immediately brewed a second gyle of it. Here's a snap of the whole-flower hops in the hop back before running into the FV last week: 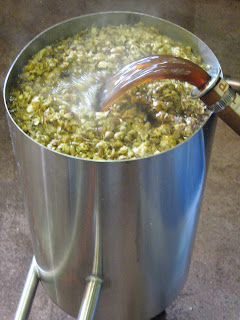 If you missed these beers however, do not dispair! After some months of pilot brewing I can present to you the first two bottled beers from our bottled beer portfolio -straight from the bottling line and 3 weeks conditioning, Lakeland Bitter and Lakeland Pale Ale ever popular at the Bitter End, and now also on your dinner table, infact anywhere you want for that matter.... 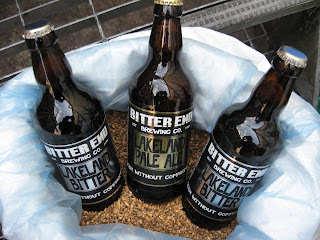 ...and keep your eyes peeled for very special one-off beers available only in the bottle. Something certainly to look forward to -keep an eye out at your local co-op...plans are also afoot for an online beer shop via www.bitterend.co.uk so fear not readers in the United States, but more on that later!
Posted by steveBrewer at 8:34 AM No comments:

Mild ale is a style which has come to be associated with low ABV beers, however mild ales were simply less heavily hopped beers than their more bitter relatives, and as such became a hugely popular style in the 19th century as the workforce driving the industrial revolution took to the malty brews as a means of restoring themselves after a long day of manual labour at the coalface. Many milds in common with most beers of old were brewed to a far higher O.G. than those of today, and some milds of today still follow this recipe -I encourage the dear reader with a curious pallette to seek out the wonderful Dark Ruby Mild, ABV 6%, brewed by the Sarah Hughes Brewery of Sedgley, West Midlands. 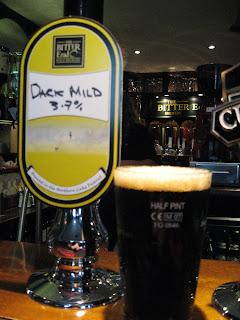 Our own interpretation is packed full of Maris Otter pale and crystal malts, with a little chocolate malt and roasted barley...a real dark mild full of flavour with the English hop, Challenger in the copper and a good dose of whole flower hops added late, in the hopback. A fine beer to restore oneself after a long day at the grindstone, or on the fells! Enjoy!
Posted by steveBrewer at 12:39 PM 3 comments:

It's a joy to feel the temperatures return from the polar depths of January...the brewhouse is not well insulated from the cold, and low night-time temperatures mean a close eye must be kept on temperature of the beers in the fermenters -in a couple of the coldest spells we had, they've had their own electric heater in the brewery to keep them cosy through the night! But it has been impossible to notice that this week has brought about milder weather -the birds are noisily going about their business below my window, and the snowdrop has been joined by the celandine beneath the hedgerow. And so brewing goes on apace -Lakeland Bitter in FV 3 has been chilled, to bring about precipitation of yeast from suspension, before racking to cask this week... 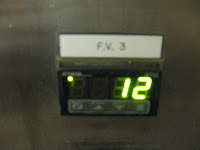 ...And a day of steam and bustle in the brewery today, sees FV 4 occupied by another gyle of the well hopped Best Gold, such is the demand for this beer by the ever-thirsty populace... 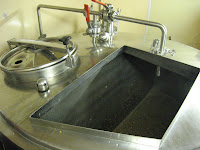 ...I shall endevour to bring you more news of seasonl brews when there is such. In the meantime allow me to whet your appetite with the news that plans might just be afoot for a rather special blended beer, in the tradition of the porters of the 19th century...watch this space!
Posted by steveBrewer at 3:25 PM No comments:

We all know that it's hungry work being a passionate connoisseur of quality beers, and hard and thirsty work for those who are inflicted with a passion for discovering the best in quality locally produced, home-cooked food. Therefore it is with great pleasure that the Bitter End is able to help in some way, by the announcement of...Our first ever speciality PIE & PINT of ale festival, at the Bitter End. The Cockermouth beer festival next door in the Kirkgate Centre kicks off on Thursday, running through to Saturday, so pop in to the Bitter End on Thursday and Friday lunchtime, or all day on Saturday before 6pm for some very special pies and micro-brewed beer.
I have managed to persuade our amazing chef to create a selection of speciality pies showcasing the best of his locally sourced, quality ingredients and combine it with the best of local micro-brewed beer. A selection of Bitter End Brewery beers will be on tap including the welcome return of seasonal beer for Dec-Jan, Espresso Stout, 5.8% ABV. Drop in and try your hand at beer and matching beer and food. See you there,
steve
Posted by steveBrewer at 9:13 AM No comments:

Ladies and gentlemen. Allow me if i may be so forward, to draw your attention to a number of imminent beer festivals where you should go, immediately, and quaff amongst many other fine ales, three fine brews from the Bitter End...


...i might particularly draw your attention to the beer for the West Cumbria CAMRA Beer Festival -a special beer to look forward too -It will have 10 weeks in the cask to condition before quaffing -expect a most suitable beer for the season, with some wonderful hop flavour from generous dry hopping. See thee all in Whitehaven,
steve
Posted by steveBrewer at 12:36 PM No comments:

Labels: Where to find our beers -Festivals

I was fortunate enough lately, to have made a visit to Herefordshire -i could not resist stopping to visit a hop field, and assess the state of the crop. Hear, dear reader is the result. The bines were laden with their resinous cones, but some dry weather would help to make the ground a little easier for the tractors to move over. Marvel at the wonders of digital technology: 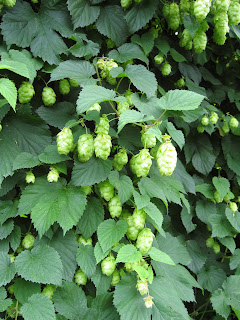 The height of the bines in this field suggests one of the dwarf 'hedgerow' varieties such as First Gold -Only attaining perhaps half the height of taller growing varieties, thus enabling easier maintainance of the crop, and use of a more efficient picking process... 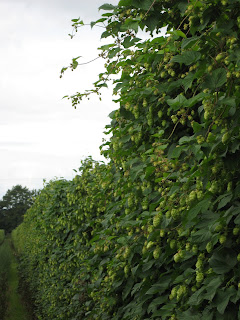 Posted by steveBrewer at 9:16 AM No comments:

Where is the Bitter End?

Find the Bitter End Pub at 15, Kirkgate (off Marketplace) Cockermouth CA13 9PJ...Find the brewery at Unit 11, Derwent Mills, Cockermouth, CA13 0HT...And you can sample Bitter End beers at our other pub the Royal Yew, in the village of Dean, off the A5086 Cockermouth-Whitehaven road.

This is the site for all things beer going on at the Bitter End...Keep your eye on this site for details of special beers in the fementers, and what's new in the world of the Bitter End Brewery.

Busy week keeping up with both bottled and cask output -Lakeland IPA (ABV 5.5%) is maturing in the cold store at the moment, and is ready to be unleashed soon. Also fermenting now:
Lakeland Amber 4% ABV
Lakeland Blonde 4.2% ABV
Lakeland Honey Beer 5% ABV